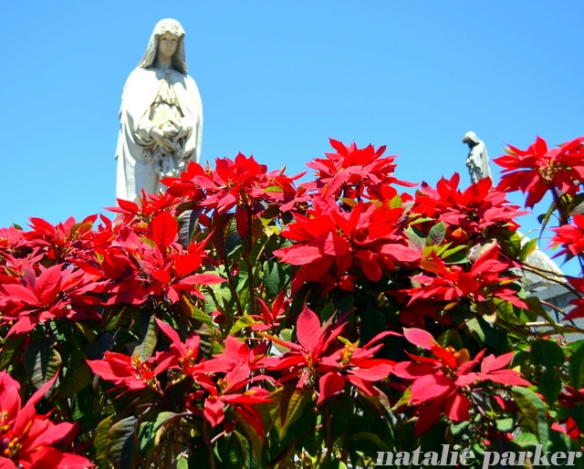 I’m not one to visit cemeteries on trips even if they are tourist attractions and famous people are buried there.  But a friend of ours who was traveling with us to Argentina and Antarctica was very into it, so Mr. P and I went along to El Cementerio de la Recoleta. We were about done with our visit.  On our way out, we passed this huge poinsettia bush.  I never realized before that I’d never seen a pointsettia growing in the wild (or just not in a pot in a Walgreens or on an ESPN set during Christmas).  I stopped to take many photos. It was our first time traveling during the Christmas season.  I’d grown up with a Dad who had to work on Christmas Eve and open a store early on the day after Christmas, so any traveling in December, much less in the southern hemisphere, was odd. It was such an oppressively hot day but it finally felt a tiny bit like Christmastime. Merry Christmas everyone!

Hi, I'm Natalie. I love paper, photos, and sending mail. I catalog my memories and I'm studying to be an archivist. I love travel and my heart sings when I buy plane tickets. Read more about me here.