I planned my album very carefully with emphasis on ease.  Here are how the pages came out so far!

I left some blanks for the title page.  I think I’ll make that after the baby is born and when we have a name.  Week 4 was the official start of the pregnancy, but I wrote a beginning card just to talk about finding out we were pregnant.

I designed the album in Week 6 and we didn’t start taking bump pictures until then.  I used whatever I had for 4 and 5. 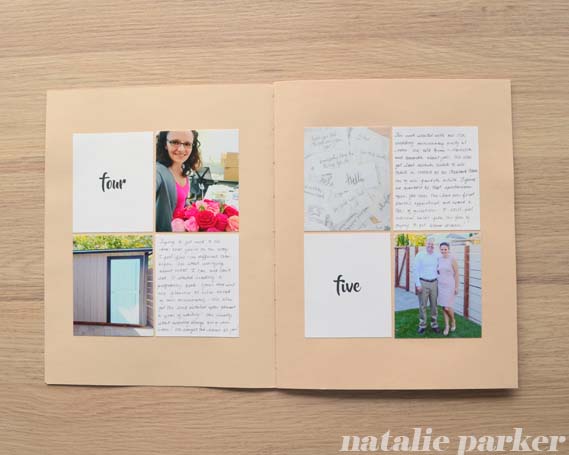 In Week 6 my best friend’s daughter was born!  Don’t ask about our Week 7 bump picture.  It’s on a memory card that’s hiding somewhere in our house.  I know that I’ll find it eventually.  Maybe on the kid’s 18th birthday?  I’m trying not to sweat it at this point.

Week 7 is also when we left for Australia!  I timed the bump pictures so we’d only have to get one on the road, which was Week 8.  Nice blank wall in our hotel room!  I balanced the camera on a couple coffee table books on top of the ironing board.

We were in Australia for most of Week 9 but took the bump picture as soon as we got home.  Other than in Week 8, the pictures don’t scream Australia, but this album is about the pregnancy and not about our trip.  I’ll scrapbook the trip separately later. 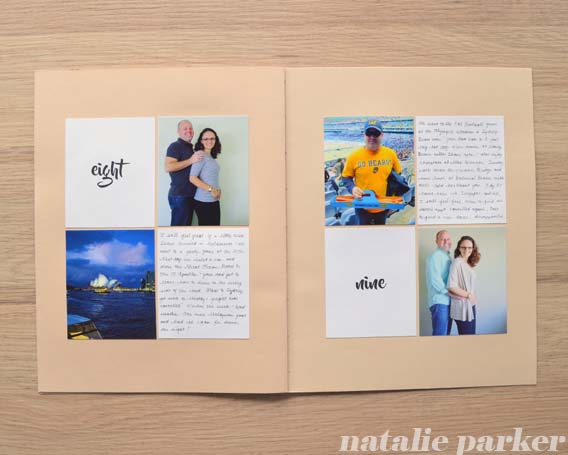 Notice I varied the layout week to week.  It looked too boring to have the cards in the same position when the pages were facing each other.

Week 11 featured a big big deal: the very first picture of our baby!  I scanned it and printed it to size for the page.

Week 12 we had another ultrasound and I realized I wanted the option to add big things.  I didn’t want to plan for things outside of my formula because I didn’t want the pressure.  But since the album size is flexible, I made a game time decision.  The font is Klinic Slab Book and I pre-cut a ton of “weeks” and numbers out. 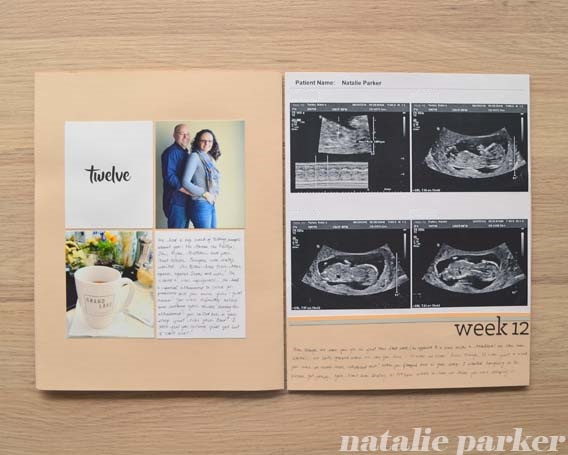 See what I mean about not wanting to wear the same outfit in each picture?  Our Oktoberfest gear in Week 13 makes me smile.  The baby also got its first quilt courtesy of my mom. 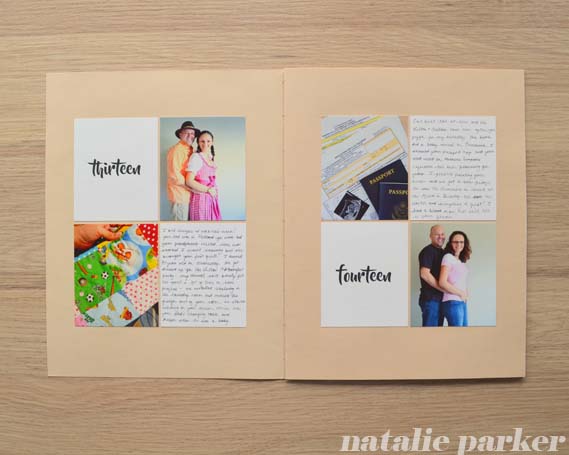 Good thing I came up with the full page option because in Week 15, we found out we are having a BOY.  I printed the message from the doctor plus a piece of the test result (several sections below blurred for privacy).  I’m glad I had the extra room to tell the story of how we found out.

I’m loving how we are mixing life stuff, baby stuff, and house stuff in the pictures.  In Week 16 we took our hospital tour (I was the only one who was sneaking pictures for my album).

Well phew!  So far so good!  Even though the little guy is quite comfortable and is taking a while to pop out, I’m loving the weekly pictures!

More Information on My Pregnancy Album

Check out these posts for everything you need to know!