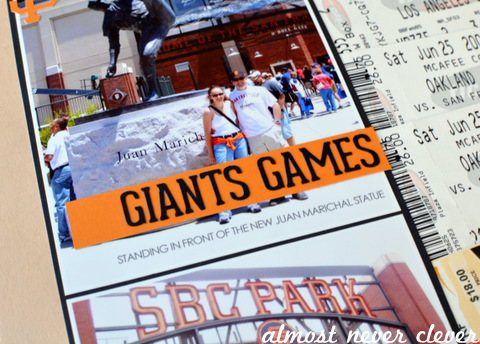 Mr. P would like me to inform you that pitchers and catchers report next week.  Just in case you didn’t know.

Keeping it Interesting: As long as we still keep going to Giants games, I’ll still be coming up with a new way to scrapbook it every year.  It’s kind of refreshing actually — I know I can try something different this year without it being the end-all-be-all.  There’s always next year!

Small Headline: I struggled with this page for a while.  It clicked when I realized I didn’t need a huge headline.  I designed a small one and glued it over top of one of the photos.

Scrapbooking an Autograph: That’s Omar Vizquel’s autograph on the back of my ticket.  He was a great player and I hope he makes it into the Hall of Fame someday (he won 11 Gold Gloves).  I thought for a while about whether I should scrapbook it or keep it in some safe place.  Said safe place would be in a box in the closet and not on display.  Whatever.  If it’s in the scrapbook people may actually see it.

Team Logo: I traced it and cut it out with the Silhouette program.  I’m not making it available here for download because it’s trademarked but I believe my personal use of it is okay.  You can trace your own sports logos using Silhouette Studio, just don’t try to give them away or sell them (this isn’t legal advice, just my opinion).